When I heard that Nothington were going to split and play some farewell shows, I crossed my fingers hoping that they would come in Montreal, or at least on the East coast. And I told one of my friends that if seeing them live meant travelling as far as California, I’d do it without any hesitation. They were one of the bands I never had the chance to see and that I wanted to see the most. So when they finally announced that they were only playing three farewell shows in California, I just booked my flight to make sure I would be at two of those shows, in San Diego and Los Angeles. Plus I had always wanted to go on a road trip along the Highway 1; two birds with one stone! I’m just glad my boyfriend is always ready to follow me in my crazy plans 😉

So the first show was part of La Escalera Fest in San Diego. The line up was pretty amazing this year, with bands like Western Settings, Problem Daughter, Mercy Music and Odd Robot, just to name a few. Unfortunately, I could only attend one of the three nights, but I definitely recommend that fest. It kind of reminded me of Pouzza Fest, with different bands in different venues.

I was so excited to have the chance to see Odd Robot. I’ve listened to their last record, Amnesiatic, so much in the last year. I couldn’t believe I was there, watching them live in California. Their set was truly amazing. They played songs from both records with a contagious enthusiasm. I couldn’t stop smiling. I was so happy to be there. And those guys are not only very talented, they are super nice too. Hopefully they’ll make it to Canada some day because I would be more than glad to see them again. 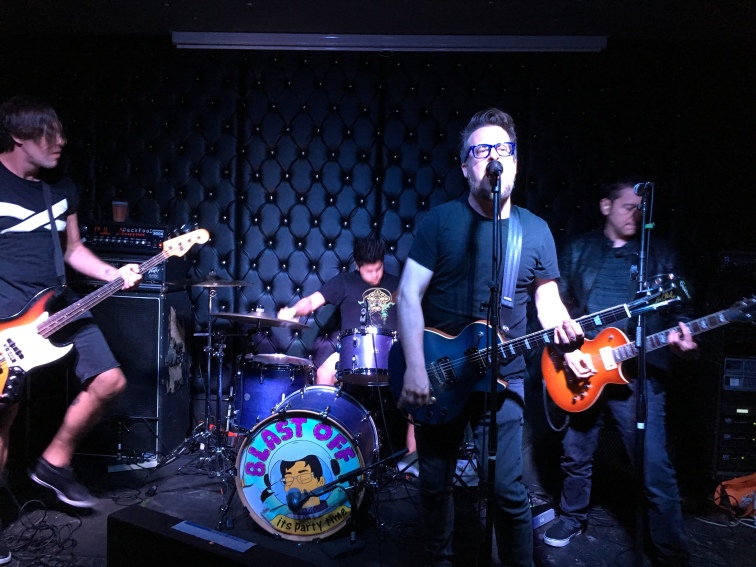 I also had the chance to see Despero – a skate punk band from Austin, TX -, Matt Caskitt & The Breaks and Mercy Music that night. They were all super good and they made the wait for Nothington way much easier. I really enjoyed seeing them all on stage.

So finally came the moment I had been waiting for for months… Nothington hit the stage! My smile was so big that I thought my jaws would break. A dream came true that night. I was close to the stage, singing along with the crowd all their greatest songs. But unfortunately, that night, there was the worst guy I’ve ever seen in a pit. The kind of guy who doesn’t know the bands and thinks that punk rock is all about getting drunk and high and pushing people on the floor and on the band playing. It was so bad that I just started watching him and kind of stopped focusing on the show. He really was dangerous for the people around him, including myself. At some point, I was so tired of his behaviour that I grabbed him (maybe a bit too hard) by the arm and told him to calm down. Don’t be a dick in the pit, dude. Punk rock is all about respect. Respect the band playing and the crowd.

So yes, the San Diego show was great, but the L.A. show was so much better for many reasons. First of all, I had the chance to attend the show with some friends from Quebec City and France. It was amazing to be there, thousands of kilometers away from our homes, sharing our love for music. It was definitely a great moment.

The show was so intense that night that it’s hard to describe it. It was like a super big wave of love between Nothington and their crowd. The band gave their best to a crowd they knew they would never play for again and the crowd gave its best to a band it knew it would never see on stage again. I couldn’t have wished for a better farewell show. The setlist, the sound, the venue, the band, the crowd… everything was perfect! When they started playing Already There, it hit me that I was there, with the love of my life, some friends I like so much, after all I’ve been through in the last year, with diabetes and other shit, watching one of my favorite bands in California and singing along my favorite songs. And I started crying. I just couldn’t help it and I wasn’t able to stop. I cried and smiled the whole show. It’s definitely one of the moments I will cherish for the rest of my life.

I’m super sad that I’ll never get the chance to hear some new songs nor see them again together on stage, but at least I was there for that perfect moment. Thank you, Nothington.