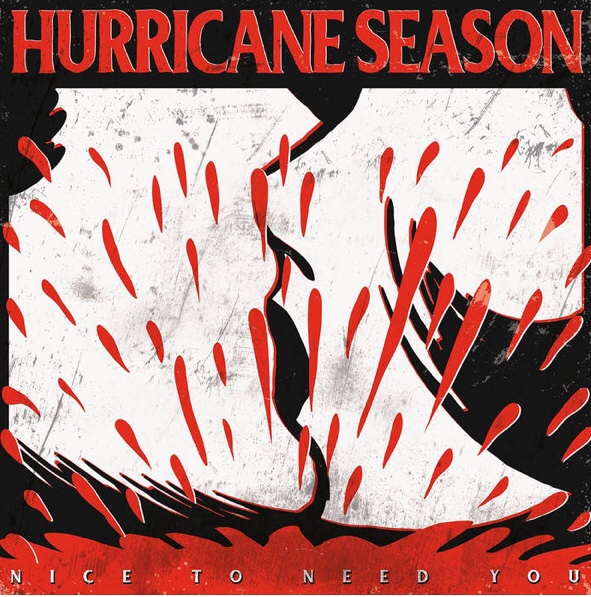 When I first listened to the new album of Hurricane Season, Nice to Need You, I didn’t know what to think about it. To be honest, I didn’t think it was bad, but I was not sure it was my type of record either. So I told myself that maybe I just wasn’t in the mood for some punk rock with hoarse voice and that I would give them another try later. And I’m so glad I gave them another try. Many, many other tries.

Hurricane Season is a punk rock trio from Austria and Nice to Need You is their first full lenght project. And I think they’re really making a great start in the punk rock world with this record.

The singer has such a particular voice that you like it or not. I don’t think there’s a in-between for Hurricane Season. But once you get used to it, it’s the perfect example of a record that grows on you. The more you listen to it, the more you want to hear it again. It’s exactly what happened to me.

The songs are all emotional and catchy. The overarching theme of the lyrics is definitely the struggle to keep on going through a rough life. Loneliness, pain, break ups, drugs… Definitely subjects a lot of people in the punk rock scene can relate to. But there are also songs about hope, like Head Down and Hey Brother, which are my favorite lyrics of the album. « You are the reason sometimes I keep my hopes up, and I’m not giving up, I won’t ever stop, I feel like I’m not done, and there is always a song left. » So beautiful. And the intensity of the song makes these lyrics even more beautiful.

I like every single song of the album, but my favorite ones are Bad Occasion, Pain and Pills, the title track Nice to Need You and On My Own. The faster pace of these songs is probably the reason why I like them so much. And I really like the fact that Sailing Away is a short intro to Nice to Need You. It makes the record flows perfectly. And what a great surprise it was to discover that my favorite song, Pain and Pills, was in fact a duet with the singer of DeeCRACKS. Amazing job, guys!

Finally, if you’re a fan of gruff punk rock, hoarse voices and great melodies, Hurricane Season – Nice to Need You is definitely a good record for you. I wish these guys a long and great career because they truly deserve it. And hopefully I’ll have the chance to see them live one day. They would definitely fit perfectly in the Pouzza Fest line up.

Here’s the link to the record : https://hurricaneseasonpunk.bandcamp.com/. I hope you’ll like them as much as I do.